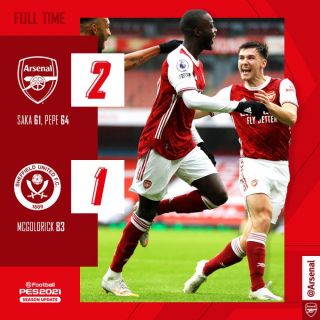 Arsenal get the points but could have been better

Arsenal will come away happy with the result today, but we didn’t dominate Sheffield United as much as we would have hoped.

The Blades came into the match having failed to clock up a single league goal, but that wasn’t going to last forever regardless.

We started the game on the right foot, having much of the possession (as you would expect), and retaining the ball in the opposing half for long spells, but our opponents are known for their ability to defend under pressure.

While we continued to press, Sheffield were not for making many mistakes, and they managed to make it to the break with the scores tied.

Not long into the second-half, we did manage to get our breakthrough however, with youngster Bukayo Saka guiding a well-placed header into the top left of the net, with the keeper out of reach of the effort.

The scoreline didn’t stay that way for long as Nicolas Pepe ran through on goal to double our lead around three minutes later, and we looked set to enjoy the last 25 minutes to play a little more open.

That wasn’t the case however, as our rivals lifted themselves to try and cause trouble at the other end in hope of getting back into the game.

And they did, David McGoldrick brought his side to within a goal of a point with under 10 minutes left to play, but unfortunately for him they failed to cause Bernd Leno any further scares.

Any less than a win would have been unacceptable, but Mikel Arteta’s earlier calls for the team to make the Emirates a fortress were surely not answered.

Against a better side, we would likely be kicking ourselves right now, but the three points is what matters at this point in the campaign.

Were Arsenal lucky not to have been against better opposition today? Will the grinding out of results become a staple of the Mikel Arteta revolution?