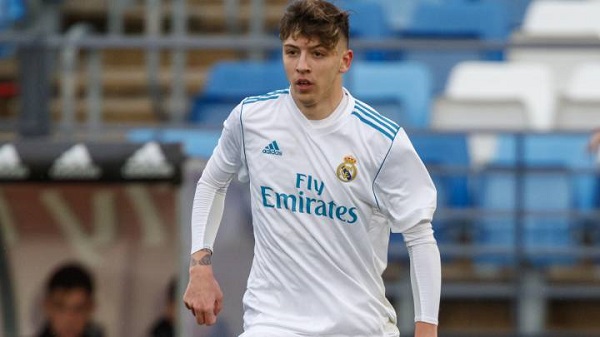 Arsenal is reportedly in a good position to sign Real Madrid midfielder, César Gelabert, despite interest from Manchester United.

The Gunners have been tracking the Spanish teenager for some time now and with his contract set to expire in 2021, Arsenal is hopeful of doing a deal for his signature.

Competition for his signature is tough with Barcelona also keen on the midfielder according to a report in Spanish media outlet AS.

Barca reportedly missed out on signing him in 2015 and the Catalans are back trying to lure him from their bitter rivals.

Real Madrid is also keen to keep him at the Bernabeu while Manchester United is competing with Arsenal in their bid to bring him to England.

AS claims that Arsenal is “well-placed” to sign the midfielder because the club’s scouts have been watching him and they scouted him when he played for the Real Madrid youth team in the UEFA Youth League.

Mikel Arteta is looking to bring some new youngsters to the Emirates after the likes of Gabriel Martinelli and Bukayo Saka impressed him this season.

Arsenal also signed Cesc Fabregas when he was a teenager from Spain and he would go on to become one of the best midfielders in the world, Gelabert is seen as having such huge potential as well.