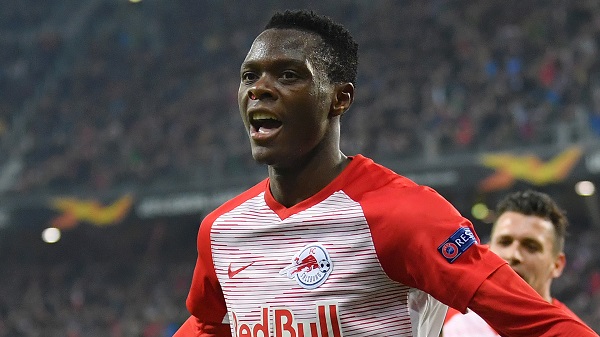 Arsenal is one of the teams looking to sign RB Salzburg’s Patson Daka as he continues to develop his game in Austria.

The Zambian has been in fine form since he stepped up to replace Erling Haaland in the Salzburg team.

Daka has been building a fine reputation for scoring goals and has 27 goals and 8 assists from 31 matches this season.

These numbers have caught the attention of top European teams who are looking to sign him.

His next destination might be the Premier League as Salzburger Nachrichten reports that he has interest from Arsenal and three other Premier League teams.

Manchester City, Manchester United and Liverpool are the other sides competing with the Gunners for his signature.

City is looking to replace the departing Sergio Aguero and they have targeted him and other attackers.

United continues to build a team that can end their wait for a trophy and they consider him one player that can bring goals for them.

Liverpool has struggled for form in this campaign and they have been tipped to sign a new striker in the summer.

These competing teams are above Arsenal on the league table and the Gunners would have to do some convincing to beat them to the signature of Daka.

The report adds that he is valued at 20m euros.