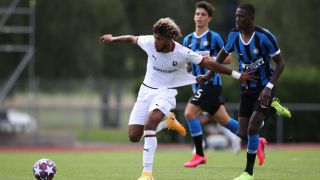 Arsenal in the running to sign coveted 18 year-old Frenchman

Arsenal are amongst a host of top sides chasing Rennes forward Giorginio Rutter this summer.

The youngster is yet to make his senior debut for the Ligue 1 side, but was on the bench yesterday as he watched his side battle on for a 4-2 win over Nimes.

With only a year remaining on his current deal, there are claims that he could well be available for a reasonable fee despite the promise shown in the lower leagues, scoring four goals in 10 appearances for Rennes second side in National 3 last term, before scoring in his only outing for the same side this season.

CalcioMercato name Milan as leading the race to sign the 18 year-old, who has picked up his following strongly by his inclusion in the French youth international sides, but his capture will not come easy.

The likes of Arsenal, Newcastle, Lyon, Bayern Munich, Borussia Dortmund and Leipzig are also credited with following his progress, and all are known for their ability to blood young talent into their first-team over the years, which could well give them an advantage over AC Milan.

While our team is blessed in attacking talent at present, Gabriel Martinelli and Eddie Nketiah have both played out wide in the team, which leaves us with Alexandre Lacazette as our only out-and-out striker, and his future in North London is far from certain.

Rutter may not be ready to fight for a first-team role at present, but should Arsenal follow up their interest in the youngster, he may well be targeting his fellow countryman’s place in the long-term.

Is our squad lacking an exceptional young centre-forward or are Martinelli and/or Nketiah expected to step-up to the role in the coming seasons?