Arsenal has one of the highest wage bills in Europe, it has been revealed. As a matter of fact, they are only the second Europa League team on the list of top wage payers in Europe, apart from Manchester United.

After the season ended, a list was compiled of the teams that pay the highest wages in Europe and ranked them by their average wages per player per season, as reported in the Sun.

Barcelona, who have been paying some of the biggest wages in Europe for some time now topped the list as they pay their players, on average £9.3m per annum.

Arsenal has struggled to enter the Champions League over the past few seasons, yet the Gunners have managed to maintain a wage budget that is higher than that of most Champions League teams.

Mesut Ozil who earns £350,000 a week is the club’s highest earner and one player that the club is keen to get rid of.

However, he isn’t the only high earner at the club with the likes of Pierre-Emerick Aubameyang and Alexandre Lacazette earning well over £100,000 a week.

These wages and those players and the club’s other players see them pay, on average, £4.78m in wages to each of their players, according to the report. 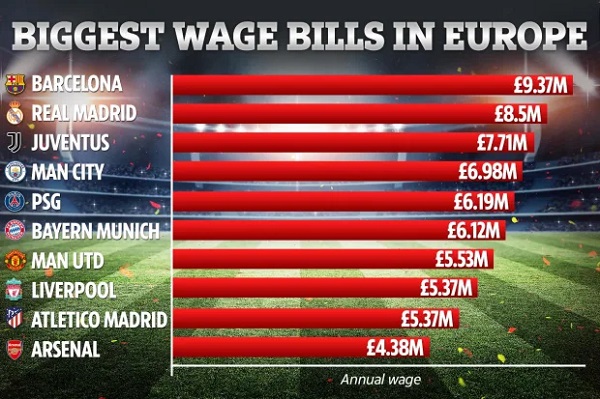