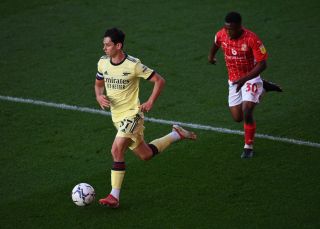 Chris Wheatley has claimed that wonderkid Charlie Patino is set for a call-up to Arsenal’s senior squad for the upcoming EFL Cup clash with Wimbledon.

The Gunners will play host to the Dons at the Emirates next Wednesday in the third round of the League Cup, and this will be a rare occasion when our manager can look to give minutes to some of his less experienced stars, and young Patino could well be at the head of the queue of those deserving of a call-up.

The 17 year-old has been thoroughly impressing behind the scenes in north London, with the senior players claimed to have been in awe of his talents when playing alongside the midfielder during our friendly win over Brentford during the international break, and he now looks set to get a taste of first-team football next week.

“We probably expect him to be on the bench this game. I’ve been told he’s really impressing the Arsenal players in the first team.”

Charles Watts also claimed that Patino could be in line for his debut against Wimbledon this week to back up the claims of Chris Wheatley.

Could Patino earn his way into the first-team squad during the campaign?

Charlie Patino the next youngster to be fast-tracked into Arsenal first team (Plus video)
15 September 2021, 12:00