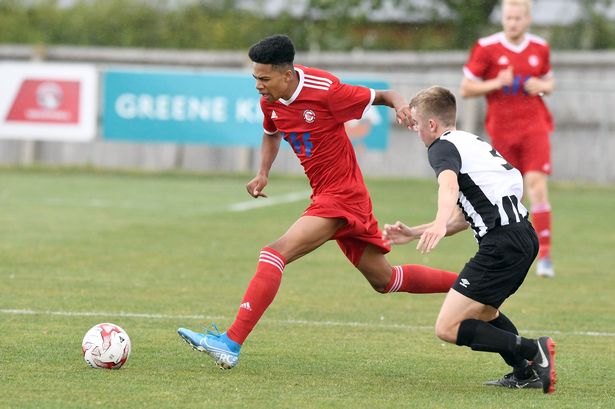 We all know that Arsenal are likely to be spending more time looking for bargain youngsters than buying expensive big name stars for the forseeable future, and that has been borne out today as it has been revealed that we are interested in tempting the 17 year-old Tyger Smalls, who is currently playing for Saffron Walden Town in the Essex Senior League.

The Saffron Walden boss Jason Maher, who only signed Smalls from Haverhill Rovers three months ago, is convinced the youngster is heading for the big time. He told the Cambridge News: “As far as I know, there has been contact from Arsenal, and there’s been quite a bit of high-profile interest in Tyger.

“He actually went out to Italy during the February half-term and spent a week with the Serie A Club S.P.A.L. He did very well over there and is now back with us.

“He’s still in full-time education, doing a BTEC at Histon College, and his mum and dad’s plan I believe is to get him through the school year and then re-evaluate things.

“He’s got the world at his feet, and it’s not easy for such a young player to have all these things going on and concentrate on school, too. It can easily turn your head, but he seems to be holding it quite well.

“If he gets a move to a top club, which I think he will, that will be great for him. He didn’t have the luck he perhaps needed as a youngster, but chose with his family to go down a different route to the academy one.

“It’s served him well, to be honest, as not many kids in these academies will have played 35-40 meaningful games in men’s football like Tyger has, and that will stand him in good stead.

“He has developed physically, and I don’t have any doubts that he will be a professional, but it’s important that he continues to do what he’s doing and remain grounded.

“I don’t see any reason why he won’t be with us for the remainder of the season, though. Then again, if Arsenal come knocking tomorrow, I don’t think Saffron Walden will be able to compete!”

Well, he sounds like a talented youngster, and being English is also a bonus. Let’s hope Arsenal can persuade him to join the Academy before someone else snaps him up. We all need a Tyger in the tank!