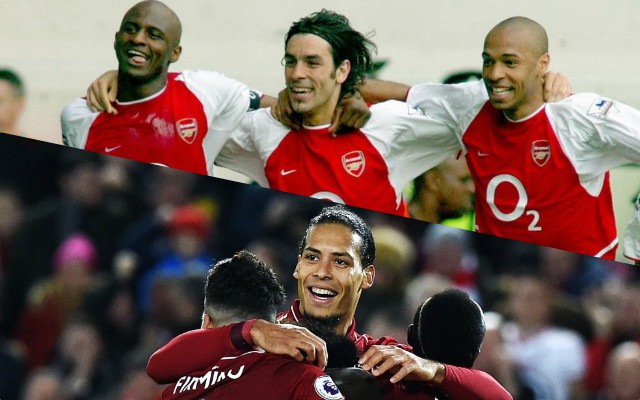 Arsenal edge our combined XI with the runaway league leaders.

It’s not an easy time to be an Arsenal fan right now, with the team languishing all the way down in 10th in the Premier League table and looking a shadow of its old great self.

The one thing we can hope to hold on to, however, is that our memorable achievement of the legendary Invincibles remains intact for another year despite serious threat from Jurgen Klopp’s hugely impressive Liverpool side.

The Reds are currently 22 points clear at the top of the table and certain to win their first title in 30 years (hopefully we won’t end up having to wait quite as long, it’s 16 years and counting for us…), but they’re also chasing two of our records.

After 25 games played this season, Liverpool are yet to lose – in fact they’ve won 24 and drawn just one of those matches in the Premier League. Credit where credit’s due, that’s astonishing consistency, but we hope someone can inflict at least one defeat on them between now and May!

Arsenal’s 2003/04 side remain the only team to go a 38-game season unbeaten in England, with Preston also going a season without defeat but in only a 22-game season back in 1888/89.

There’s still time for Liverpool to slip up in their 13 remaining league games, but perhaps more pressing is the fact that they’re closing in on our record of 49 consecutive league games unbeaten.

This run stretched over the course of three seasons, including the final two games of 2002/03 and the first nine of 2004/05, with the Invincibles campaign sandwiched between them.

Liverpool are on 42 games unbeaten right now, so are rather worryingly just eight games away from eclipsing our record.

It must be said, if they manage it, fair play to them – many felt it was a record that could well stand for many decades, if not forever.

Inevitably, there is now growing talk of comparing these two great teams, and we’ve attempted a combined XI of the best players from both in the graphic below… 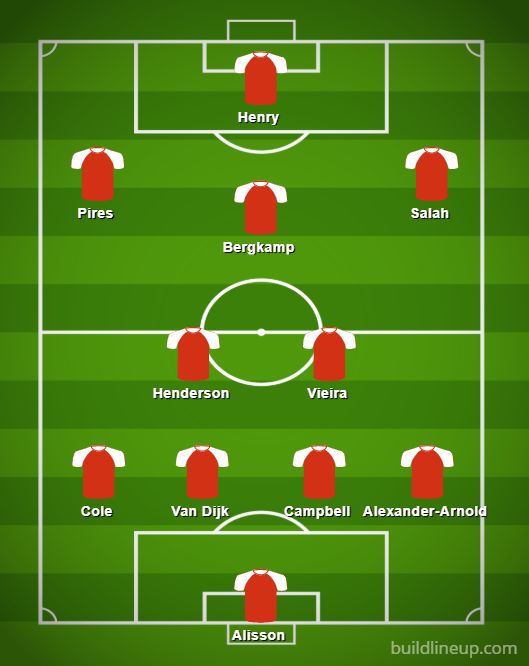 In goal, as much as we love Jens Lehmann, you have to say he had the odd moment of madness in him, with Alisson the safer pair of hands overall, as well as being very tidy with his feet.

It’s 2-2 in that back four, with Sol Campbell and Ashley Cole undoubtedly remaining two of the finest defenders to ever play in the Premier League, though I’d quite happily take Virgil van Dijk and Trent Alexander-Arnold over Kolo Toure and Lauren.

Patrick Vieira simply has to be in that midfield, with the former Gunners captain surely a starter in most people’s all-time PL line ups. Alongside him, however, has to be Jordan Henderson following his remarkable rise this season, with his leadership qualities making him a cut above Gilberto and Edu.

Liverpool fans won’t be happy with this attack, but surely there’s no arguing against Dennis Bergkamp, Robert Pires and the legendary Thierry Henry? We’ve kept Mohamed Salah in on the right, but as good as Sadio Mane and Roberto Firmino are, you can’t argue they can get past these all-time greats. What Bergkamp lacks in terms of Firmino’s work rate, he more than makes up for with his skill, technique and intelligent playmaking, while Pires at his peak also remains a more well-rounded talent than Mane.

So the Invincibles edge this line up 6-5, but who would you put in your team? Let us know in the comments below…