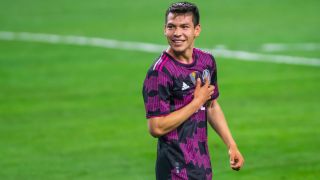 As the winter transfer window approaches, Mino Raiola will be a busy man and one of his clients could become an Arsenal player within the next 12 months.

Todofichajes reports he is looking for a new home for Napoli star, Hirving Lozano.

The Mexican has been one of the standout players at the Serie A leaders this season and several European clubs have been watching him.

The report says he wants to leave Naples for a top club and Raiola is already at work offering him to several clubs around the continent.

In England, the super-agent has offered him to Arsenal, Tottenham and Everton.

The attack is the next position Arsenal will strengthen after achieving success with their midfield and defensive signings in this campaign.

Having handpicked the players he added to his squad last summer, Mikel Arteta would have drawn up a list of attackers he wants.

Lozano has had a good start to this season in Italy, but Arteta would only add him to his squad if he believes the Mexican fits how he wants his team to play.

The former PSV man has taken time to get used to the demands of Serie A having moved there in 2019. He might need too much time to adjust to the Premier League if he moves to Arsenal.