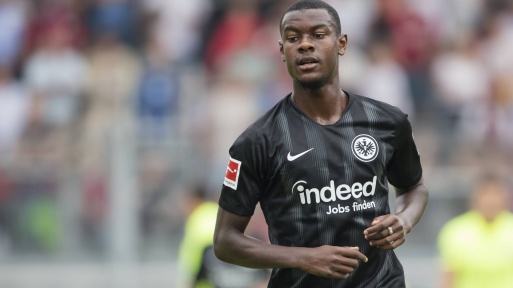 Arsenal have been added to the growing list of potential suitors for Frankfurt defender Evan N’Dicka.

The 20 year-old moved to the Bundesliga two summers ago in a £5 Million move from Auxerre, and has been a regular in the first-team playing squad.

N’Dicka has picked up an impressive 42 league appearances already, being utilised as a left-back on occasion but more commonly in his favoured centre-back role, and is under the watchful eye of a number of clubs such as Liverpool, Valencia, Sevilla and both Milan clubs, who are paying close attention to his development.

Mikel Arteta has made his intention clear in wanting a left-footed option at centre-back, similar to Pep Guardiola who has taken a shining to Aymeric Laporte as his main defender, a theory backed up by the arrival of Pablo Mari on loan this term.

The Spanish defender has recently made his debut in our first-team, and has hit the ground running, but should Mari fail to earn a permanent move, N’Dicka could be another possibility.

Our club currently has a number of defensive options, and it remains to be seen how many of the six centre-backs are in Mikel Arteta’s plans, although David Luiz is expected to have his contract extended as well as our club eagerly awaiting the arrival of William Saliba.

Should we opt to make a move for the 6ft 4″ defender, we could field two of Europes hottest young defensive talents together on occasion, although I do believe Arteta rates Luiz as the key mainstay of our defence.

Could we really bring in another centre-back this summer? Could both Mustafi and Sokratis need replacing?