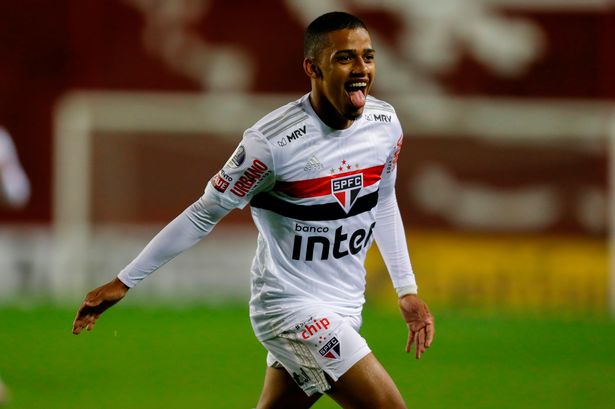 Arsenal are named among the list of teams following the progress of Sao Paolo wonderkid Brenner at present.

The 20 year-old has been enjoying a fine breakthrough season in Brazil this term, scoring 15 goals and assisting on three occasions, and is being eyed by a number of big European sides.

Arsenal are named along with Paris Saint-Germain, Ajax, Juventus, AC Milan and Lazio by CalcioMercato as holding an interest in his signature, although it remains unlikely that any would be willing to meet his release clause.

Brenner has a fee of 50 million euros written into his current playing deal, although his club are unlikely to demand such a fee at this point in time.

Unless a new contract is written up, the striker will enter into the final two years of his contract come December, and this could help with any potential suitors bid to sign him.

Arsenal have recently done well with signing from Brazil, with the thoroughly successful Gabriel Martinelli arriving from the fourth tier of their divisions, while Pablo Mari also joined from Flamengo in January on an initial loan deal, before the club made it permanent this summer.

With Edu as technical director, the North London side are believed to have strong connections with Brazil, although the player’s Italian roots may well come into play.

The 20 year-old’s mother is believed to have Italian ancestry, and he could well be entitled to a European passport, but with Brexit on the horizon that is unlikely to help Arsenal, although our rivals on the continent would be able to profit from that.

Could Arsenal’s current crop of Brazilians aid our bid to sign the young future star?