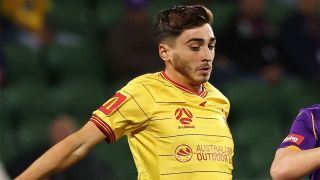 Arsenal has shown that they are an incredibly supportive club after they sent a message of support to Josh Cavallo as the Australian bravely became the first professional top-flight player to come out as gay.

He plays for A-League side Adelaide United and the Australian Under-20 national team.

His brave decision will bring contrasting remarks and he could even suffer abuse from homophobic individuals.

However, Arsenal has led the way to show that they are a club that supports and loves everyone regardless of your sexual orientation or preference.

“Thank you @JoshuaCavallo for your strength and bravery…

“You are an inspiration to millions. Everyone deserves the right to be themselves. The world of football is a better place today, because of you.”

This is a significant step by the Gunners and this show of support will bring us even more fans and followers.

It isn’t an easy step for Josh to come out, but messages like this would make it easier for other gay footballers to come out of the closet.

The Premier League is the most powerful league in the world, but it currently has no openly gay player.

Josh’s step might be helpful to those who are hiding their true identity to open up and make the world an even better place to live in for everyone.