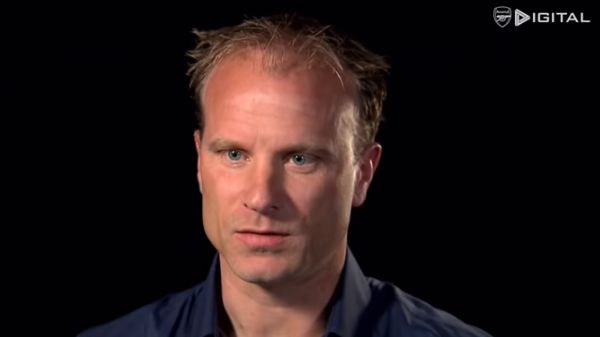 Dennis Bergkamp is part of a star-studded consortium eyeing the purchase of a Premier League club, the Mirror claims.

The Dutch forward is a legend amongst Arsenal and Premier League fans alike, and his time at the club has been honoured by a statue situated outside the Emirates Stadium.

Bergkamp is now claimed to be keen on a return to England, and is spearheading a consortium of experienced footballing minds in eyeing the purchase of a PL side.

It’s claimed that the Dutchman would be keen to oversee the progress of youth development into the first-team, which will be a key role in the club’s philosophy.

Our former star is looking to team up with Phillip Cocu, who is currently managing at Derby County, current head coach of Helsingborgs Henrik Larsson, former Liverpool forward Dirk Kuyt and Holland international coach Ronald Koeman, as part of an initiative put together by Dutch super-agent Rob Jansen.

The group are said to be ready and waiting to take up the reigns should any clubs become available, with the current world climate believed to be taking its toll on clubs finances, especially with so much uncertainty at present.

Jansen said: “We are in the waiting room, as we call it. In this crisis, the asking price of some clubs will be lowered.

“At the same time the internal -struggles at these clubs will get bigger.”

“Recently we were very close to a deal. I am not going to say now which club that was, but at the very last moment we were beaten by a foreign investor.

“That was very disappointing.”

While I don’t wish for our club to struggle financially, the prospect of new owners, paired with the return of Bergkamp in the board room is a prospect as an Arsenal fan that is hard to overlook.

I don’t imagine that they are looking at the bigger teams however, as the values of the so-called big six are huge, but it will be an interesting project to see develop should the idea pull through.

Will this group of footballing minds be guaranteed to build a successful team?

“Daniel has now reached out twice to Josh Kroenke” Bergkamp reveals Ek is still actively trying to buy Arsenal
20 May 2021, 21:00