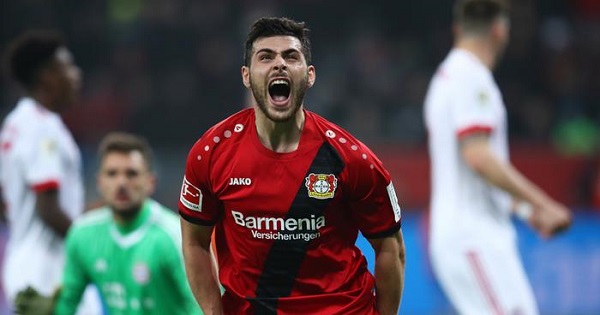 Arsenal linked with a move for 27 years old German star

Arsenal is set to make a move for Kevin Volland according to Sky Sports.

The Gunners have reportedly been monitoring the attacker for some time now and it seems he may one of Mikel Arteta’s first signings.

The Sky Sports report claims that his name would be among those submitted by Arsenal’s scouts to Arteta as the Spaniard looks to bring fresh faces to his team.

Arsenal has struggled this season as they have had to rely on Pierre-Emerick Aubameyang for all of their goals.
The Gabonese attacker is currently unsettled in London and doesn’t appear to be impressed by Arsenal’s choice of a new permanent manager.

Arteta has said he isn’t afraid to cut off players who are not on board with him and his playing philosophy.

Volland joined Leverkusen in 2016 and has remained one of the most consistent attackers in the German top flight.

He plays often as a centre forward, but he can also cut in from the right to his favoured left foot.

The future of Nicholas Pepe under Arteta is also unclear as the Ivorian struggles to get used to the Premier League, he may be sacrificed for Volland on the right of Arsenal’s attack.