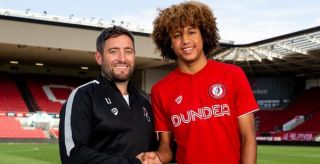 Arsenal is one of the teams interested in signing Bristol City teenage star, Han-Noah Massengo as he continues to impress in the English Championship.

The teenager joined Bristol from Monaco last year and he has continued his development in England.

Despite being just 18, he has already played 19 times for City this season and he looks set to play an even more important role in their future.

The teenager has been attracting attention from several European sides including Chelsea and Borussia Dortmund.

The Bristol Post is claiming that Arsenal is also monitoring his development. The report claims that the teenager has performed so well that Arsenal has had a scout watching him in some of his games.

Mikel Arteta has shown that he would voluntarily give chances to youngsters who can prove their worth.

The likes of Bukayo Saka and Joe Willock has been trusted by the Spaniard this season, and Eddie Nketiah is the latest player to get first-team chances at the Emirates.

Arteta is targeting a rebuilding job and it seems lots of youngsters could be making the move to the Emirates when this season ends.

William Saliba is already an Arsenal player while the likes of Carlos Soler and Declan Rice have also been linked.