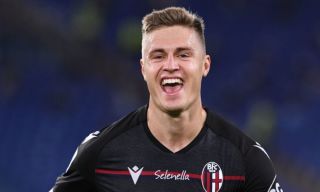 Arsenal linked with a move for Serie A Swedish midfielder

Reports have linked Mattias Svanberg with a move to Arsenal months after the Gunners signed his former teammate, Takehiro Tomiyasu.

The Japanese star has been a revelation in the Premier League and his impressive performance for the Gunners has prompted them to pay attention to other players at Bologna.

Il Resto del Carlino reports Svanberg has agreed to sign a new Bologna deal until the summer of 2024. However, he is still one player that could leave them.

The new deal doubles his current salary and protects his club from losing him on a cheap transfer fee.

At 22, Svanberg fits in perfectly into the profile of players Arsenal wants to sign now.

The Gunners bolstered their midfield in the last summer transfer window. However, the best clubs are constantly adding good players to their squad to keep it competitive.

A lot has been said about Arsenal bolstering their attack in the next transfer window, but adding one more top midfielder to their squad wouldn’t hurt.

The Swede is currently valued at €12.00m by Transfermarkt, but Bologna is likely to demand a higher fee if he signs the extension with them.

Other clubs also want to sign him, which means Arsenal has to act fast to win the race for his signature.