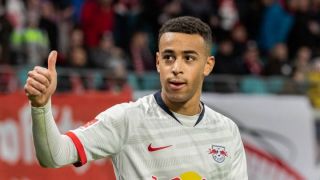 The 22-year-old, who can also be deployed as a right-back, made 37 appearances for the German side in the last campaign.

The report suggested: One of the appealing factors about Adams is that he can play both as a right-back and as a central midfielder, which makes him a good fit for Arteta’s “inverted” system on that flank.

In the most recent season, the young defender played 20 games at the defensive midfield position, 14 at the right-midfield and two at right-back.

Adams, who has 14 appearances for United States, has impressed in Germany since his move from New York Red Bulls to Leipzig in 2019.

He is currently valued at €20.00m by the Transfermarkt, which is a decent fee for a versatile player.

However, signing Adams would be complicated in the present transfer window. Leipzig, who came second in Bundesliga in the 2020/21 campaign, has already lost defenders such as Dayot Upamecano and Ibrahim Konate.

Thus, a deal for the American may be pursued at a later date.

The report further stated that it is the left-back slot where the situation is “particularly complex.”

The club have an uphill struggle to convince someone of playing second fiddle to established team member Kieran Tierney.

Keeping Sead Kolasinac by extending his contract on reduced terms might be the best option, in a market where Arsenal already have huge task on their hands.