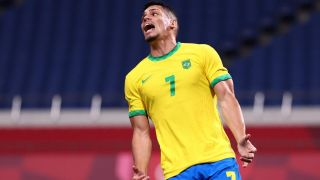 Matheus Cunha is attracting the attention of Arsenal as he struggles to shine at Atletico Madrid.

The Brazilian joined them in the last transfer window as one of the most exciting new signings in La Liga.

However, Atleti then added Antoine Griezmann to their squad just before the transfer window closed.

The Frenchman makes the competition for a place in their attack too much for Cunha and he could leave.

Fichajes says Arsenal is one of the clubs targeting him and he could leave Spain for the Emirates, even on an initial loan deal.

The 22-year-old is facing competition from the likes of Luis Suarez and Joao Felix also and his future looks far from the Spanish club even though he just joined them.

The report says Arsenal has to sign a striker soon and they have made him their top target.

Mikel Arteta needs to replace Alexandre Lacazette who looks set to leave and Cunha is the latest name to be added to Arsenal’s wishlist.

The Gunners will face competition from Borussia Dortmund, who have monitored him since his time in the Bundesliga where he played for RB Leipzig and Hertha Berlin.

Cunha’s age makes him an ideal target and Arteta would feel he can mould the Brazilian into the attacker he wants for his style of play.