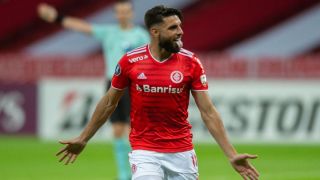 After finding success in Brazil with the signing of Gabriel Martinelli, Arsenal is set to return to the country for the signature of another attacking talent.

The Gunners have been linked with a move for Internacional striker, Yuri Alberto as he continues to shine in his native country.

The 20-year-old has 7 goals in 17 games for them already this season and he looks set to move to a European team.

The Gunners have an outstanding record in developing young talent and they want to make him the next youngster that they shape into a top attacker.

Globoesporte, reports that the Gunners are keen to take him to London and they have a good chance of achieving that.

This is because he has been offered to Barcelona for just £11m, yet the Catalans aren’t so excited about signing him.

This means Arsenal has less competition in their bid to make him their player.

That fee isn’t too much for a player of his age and talent as he can be turned into a star that is sold for several more millions.

Mikel Arteta has trusted the likes of Bukayo Saka and Emile Smith Rowe in his team for much of his time at the Emirates and this could possibly convince him to make the move to north London.