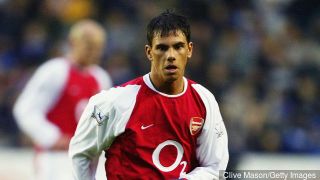 The Gabonese striker will be entering into the final 12 months of his playing contract in the next couple of weeks, and there is talk of an exit in the coming window.

Manchester United, Inter Milan, Real Madrid and Barcelona are all touted as potential suitors, but our former striker believes we should never have allowed ourselves to end up in this predicament.

Aliadiere said: “That’s why I just think it’s wrong management yet again. It should be sorted at two years. You should not let a player end up with a year left on his contract, especially a player like Aubameyang. It’s not right.

“I just think players are playing on it, they keep letting negotiations drag on and the next thing you know, he’s just got one year left.

“And now, how much are we going to sell him for with one year left? Arsenal are in the worst position you can imagine again because you’ve got a top quality player who assures you of 20-25 Premier League goals a season who is one year away from leaving on a free.

“Or, he gets sold to Barcelona or Real Madrid and for what? How much can you expect for him now? Nothing compared to what if you’d sold him last summer. They could have asked for £100 million ($121m).”

Unfortunately this isn’t the first time that we have allowed such a situation to arise, with Mesut Ozil recently holding us to ransom before signing a monster £350,000 per week contract, while Alexis Sanchez also forced a move to Manchester United with only six months remaining on his contract.

Our club was supposed to be stopping this sort of thing from happening, with Dick Law removed from his post as chief negotiator, but there has seemingly been little change.

Do the club need to hold their hands up and say ‘we messed up’? Could we still persuade Aubameyang to stay or even make him play out the year remaining on his contract?