50 YEARS SINCE ONE OF THE GREATEST WEEKS IN THE HISTORY OF ARSENAL FOOTBALL CLUB – OUR VERY FIRST DOUBLE WITH BERTIE MEE AS MANAGER: by Ken1945

It’s hard to believe that come May 3rd, it will be half a century ago that the red side of North London put the ghost of our noisy Lillywhite neighbours finally to bed…and with a vengeance.

Here are my personal memories and I hope our younger fans find it of some interest.

We hadn’t won the league title since the 1952/53 season and the FA cup since the 1949/50 season and yet we have fans moaning about nine years without a trophy of any kind – it certainly was a case of supporting The Arsenal through the thin times leading up to the 1970 Fairs cup win.

The title was the first part of the double and one needs to try and visualise what happened that Monday night on the 3rd of May 1971.

The game brought the whole of North London to a standstill, with the North Circular road jammed up, along with every other major road around the area.

Try and imagine what was happening around the area – the official crowd at WHL was given as 51,992, with an estimated extra 25,000 getting in by illegal means…then add another estimated 40,000 locked out…a total of over 100,000 fans wanting to see the league decider in a ground that held under half of the estimated fans who wanted to see it!!!

For some reason, the league had not made it an all-ticket match, so it was on a first come first served basis for all but the spuds season ticket holders (I assume!!).

I had an afternoon off work and arrived at the ground from home at 3.30- 4.00 and the queue of fans were already enormous.

In all honesty, it looked like a home game, such were the scarves, hats and rosettes around with the famous red and white colours… a truly wonderful feeling, if you were a Gooner of course!!!

I knew I wouldn’t get in, unless I was crafty, so I walked up to the front of the queue and asked a policeman where I needed to go – he pushed me into the very front of the waiting throng, where I was met with abuse and a few kicks etc, but who cared???

The team that night was as follows:

Bertie Mee was the Manager.

It was the final game of the season and we were one point behind Leeds, with a better goal difference of 0.01 – meaning a win or a 0-0 draw would give us the title…. anything else and Leeds were champions.

The game went by in a flash and no quarter was given by the Spuds, because they knew we had a chance to emulate their double winning side of the 1960’s and it would mean us winning the title at their ground – bragging rights for ever was at stake!!!

We were fantastic, giving as good as we got and the scores were level with just two minutes left and WHL was full of Gooners, chanting, cheering, hugging each other and not daring to look at the actual game…up stepped George Armstrong and his cross was met by Ray Kennedy, who headed in from about six yards out.

I really cannot remember the final two or three minutes of the game, hiding behind other fans, butterflies everywhere and actually not believing that we were so close to becoming CHAMPIONS.

The final whistle went and the players ran for their lives, as the crowd ran onto the pitch in pure delirium and the whole of the ground was a sea of red and white…what a wonderful experience.

I grabbed a fistful of the turf and shoved it in my pocket for future memories.

The chanting was at fever pitch for the manager and players to show themselves and, finally, Bertie Mee and (I think) Frank McLintock appeared high up from one of the stands and the party really began on the pitch.

It took hours to get out of the ground and even longer to get back to Edmonton, where my car was parked.

I still have every newspaper from the following day and was on a high all week, waiting for the cup final on Saturday 8th May at Wembley and against another old adversary, Liverpool.

They had had a very smooth ride to the semi-final, playing every tie at home, including a draw with the spuds, before winning the replay.

Meanwhile, we had to play every game away from home, including two replays at Highbury, in order make it to Wembley and the opportunity of doing the double.

Liverpool finished 5th in the league and had just been knocked out of Europe, so the game was going to be a hard one and the usual questions were asked if Bertie Mee’s side could raise themselves after Monday night – the rest is history.

Just five days after that historical win at our noisy neighbours, the same starting eleven stepped out on to the Wembley turf, with Frank McLintock trying to make it seventh time lucky (I think that was how many time he had tried to win at Wembley).

I was one of the unlucky ones who didn’t get a ticket, so like millions of other Gooners, I sat on the edge of the chair, hiding behind it, walking in and out of the room as the game was played and watching it through my fingers.

We showed no signs of fatigue from Monday night’s game and, in all honesty, we should have won it in normal time, but we didn’t, and disaster struck in the opening minutes of extra time, when Steve Heighway scored from an impossible angle to put Liverpool ahead.

But Frank McLintock was not going to lose yet again at Wembley, and he drove us forward again and again.

Eddie Kelly, our sub, scored the equaliser and, as every Gooner knows, it was Charlie George combining with John Radford to score a spectacular winning goal to complete our first ever double.

It seems like only yesterday for me that this all took place, but when I look at the programmes that cost 5p for the spuds game and 10p for the Wembley programme, I know that the world has marched on!!!

I still hope to see our club win the league once again, while George Graham and Arsene Wenger have ensured that The Arsenal have remained one of the top clubs in the world… let’s all hope that Mikel Arteta can bring glory days like those during May 1971, and I hope you enjoyed the ramblings and memories of an older Gooner….HAPPY DAYS INDEED.

I have tried to enclose a photograph of my memories from that day in a framed picture that I made up. It hangs proudly in my Arsenal man cave room!! 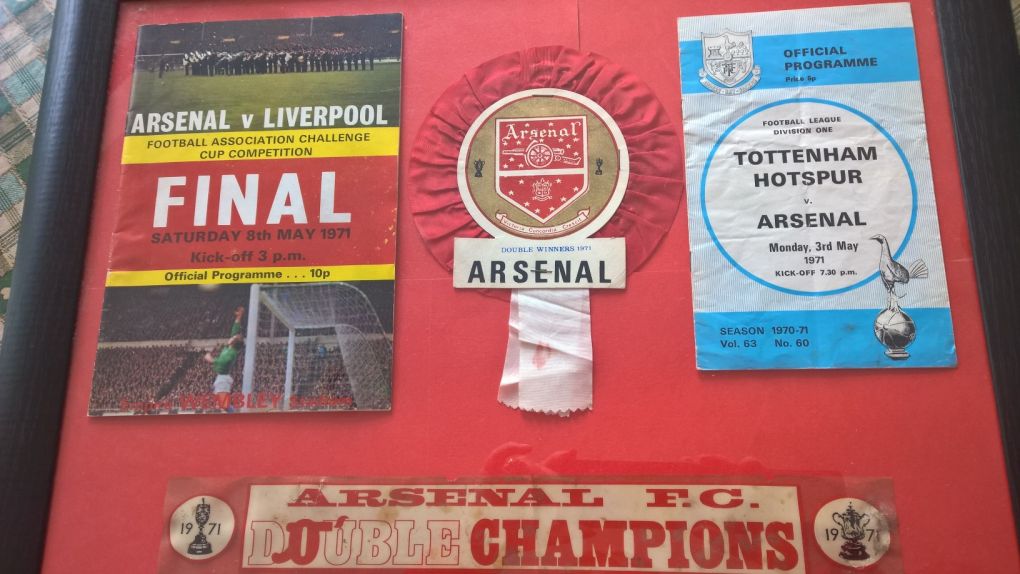