Arsenal Memories Series – 60 Years of Ups and Downs … and Counting

There has been discussion over the last few days of JustArsenal asking fans to send in their favourite Arsenal memories from long-time Gooners. One of the main protaginists in Ken1945, so I thought I’d delve into the archives as I remember the youngster (!) sending in an article himself a while ago regarding his own favourite memorablia of the good old (and the bad old!) days.

So with Arsenal currently in probably their worst position since Ken started going to Highbury, let’s begin with this one that was first published 18 months ago…

With all the rumours, discussions and arguments involving our club and its fanbase, I thought “what about some nostalgic Arsenal memories that might bring a smile to our faces”?

As some of you might know, I am lucky enough to have a wife of over 50 years, who lets me indulge in my unconditional love of our club.

So much so, that I have a room of my own, with the obligatory 42inch TV, tropical fish and all my accrued physical memories of The Arsenal.

From over 1000’s of programmes, every daily newspaper report the day after Bertie Mee led us to the double at WHL, books, videos, DVD’s, pictures on the walls, models of Highbury, Emirates, all the crests that the club has had on our shirts and (courtesy of Danbury Mint) a badge for every single honour we have won…including the Charity/Community Shields.

I then thought what would be the top five items that mean so much to me and so I have laid them out, with a little story about them.

So, in date order, here they are:

1. The rosette I wore to Wembley when we lost to Swindon Town in the league cup during the 68/69 season by 3 goals to 1 and this after losing in the same competition to Leeds United the year before by 1 goal to 0. 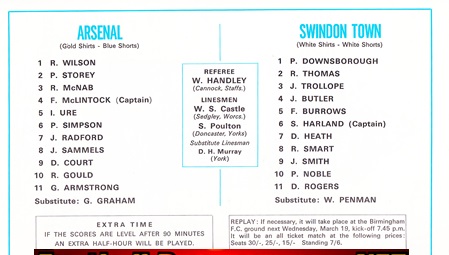 As I left the twin towers, Arsenal scarves, rosettes, hats and everything else red and white had been thrown away in disgust…we had just lost yet another final to a club two divisions below us. I vowed to keep this rosette to remind me of the bad old days, as I was convinced that one day we would be the biggest club in the world.

2. The programme from the night we beat the Spuds at WHL to win the double and, once and for all, shove all the taunts down the tiny tots throats. What a wonderful night, remembered to this day when Bertie Mee (the most dapper of managers) appeared with his coat off and braces showing jumping up and down and laughing with the fans. 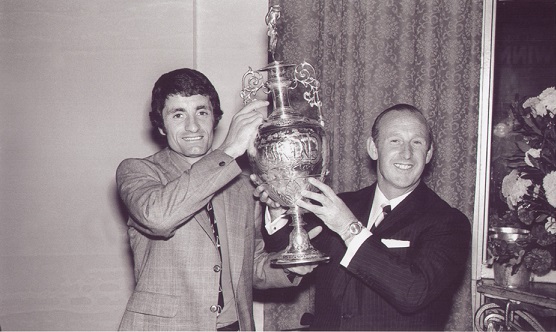 I also had a clod of the spuds pitch safely squirrelled away in my collection, but my wife, while doing the housework, threw it away!!!

3. My signed shirt of every single player from The Invincibles, authenticated by The Arsenal and with photographs of some of the players signing the said shirt. It hangs on the wall and the saddest thing is we just recently lost the first of The Invincibles in Jose Reyes.

4. Two pictures of my grandsons posing for a photograph with the great Thiery Henry. They were taken at Euston station as the boys were about to board a Eurotunnel train and the great man quite happily posed for one and waited while my daughter ran and got her other son from a nearby sandwich bar!!!

5. Any of you programme buyers who have the one from the Everton game that took place on October 24th 2015, will see that within the noticeboard section there is a message for me from my family. “KEN LOCK HAPPY 70TH BIRTHDAY” … Fancy that, me appearing in The Arsenal programme!!! My dream was to have a shirt number by the side of my name, but this is the nearest I ever got to fulfilling that dream. Along with this, I got a personal letter from the great Arsene Wenger, congratulating me on my 70th birthday and also for being a loyal supporter for over 60 years. Pride of place for me of course!!!!

I hope I haven’t bored too many of you and I sincerely hope that the younger ones who read this will have such personal and wonderful memories of the greatest football club in the world and I would love to know what Arsenal memories/keepsakes other Gooners have to tell us about.

So here is an invite to send me YOUR own personal Arsenal memories of going to watch the Gunners, either at Highbury or the Emirates, depending on your age of course. Please use the email address you can find here at our “Contact Us” page…