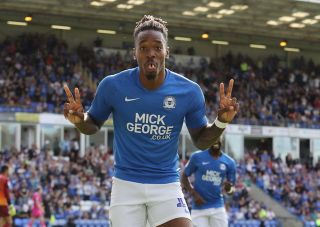 Arsenal is monitoring the progress of Ivan Toney as he continues to shine at Brentford, according to The Express.

The striker is the Championship’s top scorer with 16 goals, as he simply cannot stop scoring.

He was signed from Peterborough in the summer as a replacement for Ollie Watkins, who had moved to Aston Villa.

The Gunners are one of the teams that have been impressed with how he has performed in England’s second-tier this season, and they are considering a move for him.

However, they will not be pursuing their interest in him this month as Mikel Arteta is having to work with limited funds.

The Gunners will instead keep their eyes on him ahead of the summer transfer window.

Arsenal has more than enough attackers at the moment, and they are currently struggling to convince Folarin Balogun to remain with them.

If they sign Toney, the teenage striker will see it as a clear sign that they are not ready to slot him into their first-team plans yet.

The report adds that The Bees will also not be interested in selling him this month. They believe that his current run of form might help them achieve promotion to the Premier League at the end of this season.

‘These days, I don’t see them winning nothing any time soon.’ Brentford striker trolls Arsenal
14 September 2021, 15:45