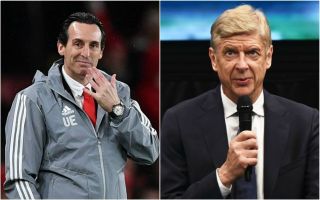 Are you team Arsene or team Unai on this…?

Former Arsenal manager Arsene Wenger has aimed a dig back at Unai Emery following his recent claims about the situation he inherited at the Emirates Stadium.

Emery was sacked by Arsenal back in November after some hugely disappointing results and performances this season, and in a recent interview he appeared to indirectly blame Wenger as he described the club as having been in decline before he arrived.

Wenger isn’t having this, though, with the Daily Mirror quoting him as taking a swipe back at the Spanish tactician by explaining all the ways in which he seemed to have the team on the right track.

“In 2017 we made 75 points and won the FA Cup so you cannot say that [Arsenal were in decline] and the year before [2016] we finished second in the league,” the Frenchman said.

“2018 was my last year but it is very difficult to come out on that.

“Arsenal is a club that is in a very strong position financially. It has good players, after that when you are a manager you have to stand up for what you do and your result and not look around you.

“That is the only thing you can do.”

Of course, while there may be some truth to what Emery says – the Gunners job certainly isn’t the easiest right now – it’s fair to say he has to also take some responsibility for how things unfolded during his short reign.

You only have to look at our quick improvement under rookie manager Mikel Arteta to see Emery’s glaring flaws. The challenging circumstances at the club have not changed, but Arteta looks like the far better long-term solution for us going forward.