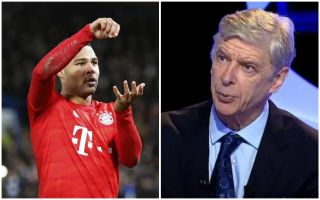 Does this point to why Wenger was unsure about keeping Gnabry at Arsenal?

The former Gunners youngster put in another exciting display against a Premier League club in the Champions League, scoring two at Stamford Bridge following an incredible four-goal haul away to Tottenham in the group stage earlier this season.

It seems pretty clear Gnabry is a player Arsenal should never have let go, and it’s pretty painful seeing him tear it up for Bayern now – even if many fans are also amused at seeing him demolish our rivals.

The Germany international looks like he’s only going to keep on getting better, but Wenger suggested after the game that there is one side to his game that makes him unsure about just how far he can go.

“This guy has no real limitations,” Wenger told beIN Sports, as quoted by Goal. “It’s more about how much does he want to suffer?

“He has pace, power, technical ability, he is very intelligent but sometimes he looks for the easy way. That was his problem.

“I sent him to West Brom and it didn’t work out at all. In fairness, I think we had an agreement with him and Bayern stole him away from Bremen.

“He is a good player. He has individual ability and collective ability.”

We’re not sure there’s much evidence of this, but then who are we to question the legendary Frenchman?