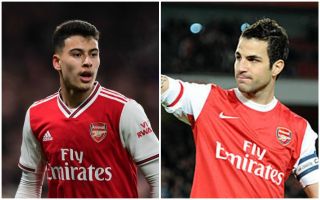 Fabregas made an exciting revelation during a Twitter Q&A.

Former Arsenal star Cesc Fabregas paid a huge compliment to Gunners wonderkid Gabriel Martinelli with an exciting revelation during a question and answer session with fans on Twitter yesterday.

Our former captain answered a variety of questions from Twitter users, but one that will stand out to Arsenal fans will be his singling out of Martinelli.

When asked which current member of the Arsenal squad Fabregas wishes he could play with, the Spaniard chose our Brazilian youngster over some of our bigger names such as Pierre-Emerick Aubameyang, Nicolas Pepe or Mesut Ozil.

This shows just how highly Fabregas rates Martinelli, who has exploded onto the scene this season with a hugely impressive debut campaign.

Still only 18 years of age, Martinelli managed 10 goals in all competitions before the season had to be suspended due to coronavirus, and let’s hope he can continue to shine once playing is able to resume.

Arsenal youngster names player that impressed him when he trained with them
31 December 2021, 23:30

Arsenal have finally found their attacking chemistry under Arteta
26 December 2021, 20:01