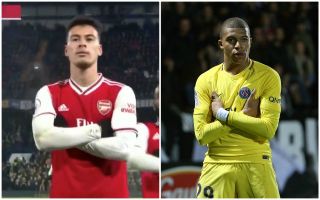 Gabriel Martinelli has explained how *that* celebration came about.

Arsenal starlet Gabriel Martinelli has cleared up some confusion about the time he copied Kylian Mbappe’s trademark arms-crossed celebration after scoring against Chelsea this season.

The Brazilian wonderkid notably scored a delightful solo goal in a 2-2 draw at Stamford Bridge, in what has proven to be one of the biggest highlights of a very impressive debut season in north London.

Martinelli certainly looks capable of being one of the finest players in world football if he can continue along this path, with Mbappe also initially bursting onto the scene at a similarly young age.

It was therefore intriguing to see Martinelli pay tribute to Mbappe with his celebration, but he told Arsenal’s official site, as quoted by the Daily Mail, that it wasn’t because he saw a fan in the crowd doing it, but that he’d actually planned it all along – with his mum!

He said: “Many people think I looked at the fans and saw a guy with his arms crossed, but I didn’t.

“When I celebrated after scoring, I didn’t notice him doing that.

“I already had the idea of celebrating like that if I scored. It was funny because I’d said to my mother the night before that I was going to score.

“She was making dinner and I was in the kitchen with her and my father and I said to her that I was going to score and asked what she thought about celebrating like that.

“She said: ‘Go for it!’ So I had that celebration in my head if I scored and it wasn’t to do with seeing that guy doing it.

“I already had it in my head that I was going to do it.”