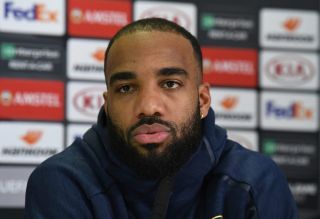 Arsenal striker Alexandre Lacazette has praised his team-mate Bukayo Saka as perhaps the best young player in the Premier League.

That’s high praise for the 18-year-old, who is indeed enjoying a memorable breakthrough season in the Arsenal first-team.

Starting out as a winger at youth level, Saka has adapted brilliantly to his new position of left-back, where he’s had to fill in due to injuries to both Kieran Tierney and Sead Kolasinac. It’s been a big ask for him, but he’s done what he’s had to and there’s now no guarantee those other two are going to be getting back into the starting XI.

Speaking ahead of tonight’s Europa League clash against Olympiacos, Lacazette has talked up the youngster who so expertly set up his winning goal in the first leg of this tie.

When asked about how good Saka is, Lacazette made it clear he thinks he’s one of the best.

“He’s really good. I think he’s maybe the best young player in the league,” the Frenchman told his press conference, as quoted by the Daily Mirror.

“Like I said, he needs to improve in a few things but you can see the quality he has and he’s humble. The best thing for him is to be involved.

“He wants to work, he accepts criticism because he wants to improve.”