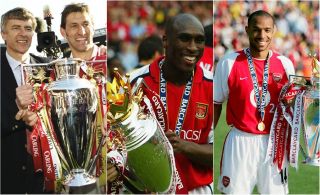 Which of Arsenal’s title winners were the best?

There’s a lot of talk at the moment about the best Premier League-winning sides ever as runaway league leaders Liverpool still look on course for a record-breaking season.

Still, the Reds won’t be going unbeaten like Arsenal did in 2003/04, so there’s been plenty of celebration among Gunners supporters about holding on to our unique Invincibles achievement for another year.

It may well be that that achievement will never be matched, as it’s only happened on one other occasion in the entire history of English football, when Preston went unbeaten over a 22-game season, rather than the 38-game campaign we did it in on the way to setting the all-time longest unbeaten run in English top flight football of 49 matches.

Still, discussing Arsenal’s best sides, former right-back Lee Dixon believes the 1997/98 side he played in was actually better than the 2003/04 team.

These are strong words from an Arsenal legend, but perhaps some Gooners will agree with his take on this…

“Look I didn’t play in that team- It was a brilliant team,” he said, as quoted by the Metro.

“I watched them throughout that season and I wanted them to go undefeated because they deserved to but I honestly think the best team I played in was the 1998 team.

“If we played the ‘Invincibles’ ten times and there were no draws, we’d win 6-4.”

Of course, we’ll never know for sure which side would beat which. The ’98 team won the double and perhaps at times played better football than the Invincibles, but they lost six games to the Invincibles’ zero, and finished on 12 points fewer.

Others, meanwhile, might justifiably point to the 2001/02 side as the truly perfect Wenger team, and it’s criminally overlooked now that they also made history by scoring in every game that season, also whilst winning another double and remaining unbeaten away from home.

Who do you think was the best Arsenal team ever? Let us know in the comments!