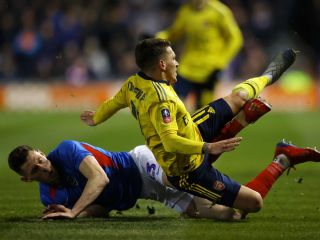 Some Pompey fans let the rest of the home crowd down.

A number of Portsmouth fans could be heard taunting Arsenal midfielder Lucas Torreira after injury forced him off in yesterday’s FA Cup fifth round clash.

A largely youthful Gunners side won 2-0 at Fratton Park, which was always known for providing a lively atmosphere during Pompey’s years in the Premier League.

Still, some of the home crowd took things a bit far yesterday as the Daily Mirror report they aimed a nasty chant at Torreira over his injury.

The report states some fans could be heard chanting: “You’re going home in an ambulance.”

We’re all for fans exchanging a bit of banter at games and trying to intimidate opposition players with a lively atmosphere, but there really seems no need for this as Torreira’s injury looked a bad one that could keep him out for some time.

The Uruguay international had to go off on a stretcher and will have been in a great deal of pain, so we’re disappointed with those Portsmouth fans who saw an opportunity to mock him over it.