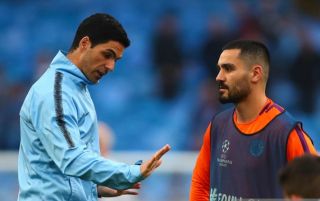 Ilkay Gundogan has spoken about working with Mikel Arteta.

Manchester City midfielder Ilkay Gundogan took part in a question-and-answer session with fans on Twitter yesterday, and made a couple of revelations that might be of interest to Arsenal fans.

As well as that, Gundogan was able to shed some light on working under current Gunners boss Mikel Arteta, who took over as head coach at the Emirates Stadium earlier this season after leaving his role in Pep Guardiola’s coaching staff at City.

The Spaniard has made a promising start in management, and Gundogan clearly rates him highly after working with him at the Etihad Stadium.

When asked about what it was like working under Arteta’s guidance as a coach, Gundogan was very complimentary, saying they had a good relationship and that he was caring and a hard worker…