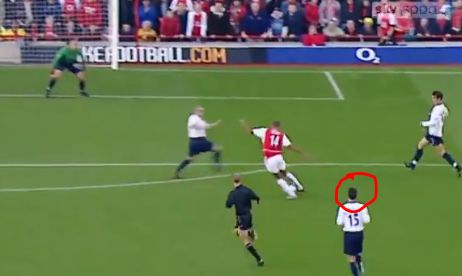 Arsenal fans will love this video clip of Thierry Henry and Jamie Redknapp reliving his legendary solo goal against Tottenham in 2002.

Watch the video below as the Frenchman and ex-Spurs ace Redknapp watch the goal back and talk about how it came about.

"People gave you stick because even the referee ran past you!" 😂@ThierryHenry and Jamie Redknapp look back at a famous North London Derby strike on the #SkyFootballShow pic.twitter.com/zYsGhkJyM2

Henry notes that Redknapp didn’t do a great deal to track back at that point, with even the referee out-running him!

You know the rest – Henry beat almost the entire Tottenham defence before firing home in this memorable 3-0 win.

“That place would have been toxic” Pundit says Arsenal has benefited from the absence of fans
13 May 2021, 18:00