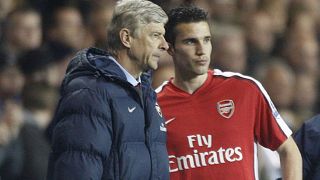 RVP has compared some managerial greats.

Former Arsenal striker Robin van Persie has compared legendary former Gunners boss Arsene Wenger to Sir Alex Ferguson and Louis van Gaal in an analysis of the best managers he ever played under.

The Dutchman had a great career in the Premier League and elsewhere, and got to play under some of the finest tacticians of modern history.

Van Persie’s career breakthrough came under Wenger at Arsenal, and the former forward praised the Frenchman for being a mix of Ferguson and Van Gaal in the way that he did things.

Writing in a book about LVG, as quoted by the Metro, Van Persie also praised Wenger for his long-term approach to the game, though he perhaps seemed to suggest that former Man Utd boss Ferguson was some way ahead of the other coaches he worked with.

He said: “Wenger was a combination of Ferguson and Van Gaal. Arsene always emphasised all the positive things and he looked at what would work for the long term.

“Tactically he [Van Gaal] is a genius. You can’t deny that. I have had managers who had their own strengths. But Ferguson really was a super manager.”

Van Persie controversially left Arsenal for rivals United in 2012 and he won’t have done his reputation too much good here by appearing to opt for Fergie over Wenger again.