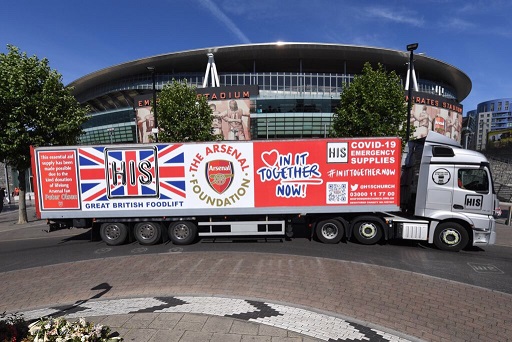 Arsenal Old-Boy helps the Gunners to feed 30,000 families in Islington

There is no doubt that there are thousands of families struggling to survive during this crisis, and there have been many heartwarming stories of selfless sacrifice by helping others that are a lot worse off than themselves.

It is nice to be able to share a story about the generosity of a lifelong Arsenal fan, despite the fact that Peter Olsen is now retired in Hong Kong, who has never forgotten his roots. As the 77 year-old said a couple of years ago: “I was born in Holloway where we had no hot water or bathroom,”

“My father did a runner when I was 15 and my mam died when I was 20 so I was a mess as a kid but I’ve always loved football and that has played a major part throughout my life.

“I had trials with Arsenal as a young goalkeeper and played as a pro in Hong Kong, so I love being involved in football.

So he has now helped fund the Arsenal Lorry, which is driving around the area giving away free meals to whoever needs them, and he is proud to help out his old neighbourhood. The Lorry has a large sign on the far left of the lorry with his name on in recognition of his contribution. He told the Islington Tribune: “I like to donate to causes I have an emotional involvement in. It is absolutely magic for me to be able to do this. As a child I used to collect 12 glass bottles and return them to the off-licence so I could get tuppence on each as my family needed the money.

“To be in a position to give something back to my hometown – well, it’s the most joyous thing of my life, just to be able to do something to help.”

It is nice to hear that the Arsenal Foundation are also helping to give something back to their local community, and Peter Olsen also deserves recognition for his help….