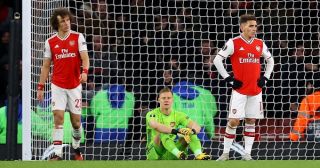 A while ago I was questioned on Just Arsenal for not agreeing that Leno was World class, and last week I said that I wouldn’t place in him in the top three keepers in the Premiership.

The arrogance of some gooners shock me. I wasn’t and am not saying the German isn’t good, I simply don’t overuse the term ‘world class’ as you need a body of work behind you to support your claims.

So, you know how social media goes?
Every time our goalie makes a save I’m reminded on social media that Leno is world class, even though that’s his job which he gets paid thousands of pounds a week to do.

This is not to point out every error (if it was could of written an article about him after home games with Chelsea, Everton, away at Southampton, etc) yet we can’t have it both ways, if you’re calling him World class, that’s the standard I will now base him on.

If he had let an Olympiakos shot slip through his fingers, then I wouldn’t be concerned. That would be a standard mistake and we all as human beings make mistakes. What worries me on Thursday was the 2nd goal we conceded was all about his mentality. I believe you need talent to make it to high level sport but what separates the good to the great is your mentality.

I can name you some of the biggest names who went missing at a major final. I truly believe that if that was a Premiership game Leno deals with a back pass no problem.

Any average weekend he kicks the ball out for a throw in or smashes it up the pitch and we all go home happy. Yet knockout competition takes a different mindset, the line between qualification and failure can be so small. The very best handle that and don’t let it affect their decisions. They back their own ability.

Leno got crippled by anxiety, he feared failure and it crippled him.

It’s not a criticism of him, it’s more aimed at those so reactionary, so quick to tell our players how fantastic they are when they haven’t achieved anything. This wasn’t a World Cup final; this was the Europa League and he bottled it. This was the first time we saw how Leno would deal with the pressure of knock out football.

So next time Leno makes a save say well done but please don’t say he’s world class. Let’s wait until he actually succeeds at something in the sport…