At the moment, it cannot get worse for Arsenal. Even though we didn’t expect them to beat Manchester City, this 4-1 loss was embarrassing.

The Cups were a good place for us last season, and we even won the FA Cup, but City gained revenged over us for eliminating them from the said competition last season.

The players needed to step up, but did they do that in this game? Here is our Arsenal player ratings.

Runar Alex Runarsson – 2
Looks like the goalkeeper version of David Luiz, fine save from Gabriel Jesus, but what was that about the free-kick? Terrible game.

Shkodran Mustafi – 4
What a relief that he is leaving after this season. He literally gifted Jesus the first goal by not marking him.

Gabriel Magalhaes – 4
Looked like he has never dealt with a team passing the ball so quick in front of him. Not his best night. 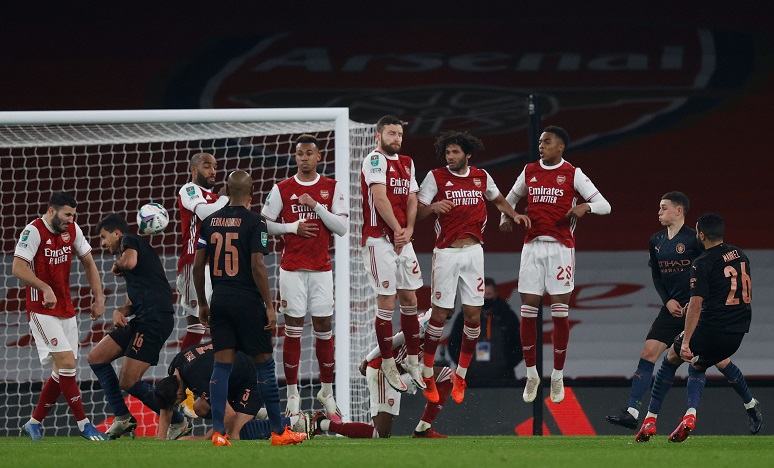 Sead Kolasinac – 4
Struggled to cope with City’s attack on his wing and offered almost nothing meaningful going forward.

Mohamed Elneny – 4
Where is the form that he showed at the start of the season? Couldn’t really help the team and can be rash in the challenge.

Ainsley Maitland-Niles – 4
City suffocated him with intense pressing. Doesn’t have the experience to do better in this situation.

Dani Ceballos – 4
Looks different from last season. Played like he had an inferiority complex against a fighting City midfield.

Cedric Soares – 4
I can hardly find something he does well, attacking or defending.

Alexandre Lacazette – 6
Classy finish for Arsenal’s goal, if he can do more of that Arteta will have a job by January.

Subs
Nicolas Pepe – 4
How did he fire that shot off target? If he can’t take chances, Arsenal doesn’t need him now.

Emile Smith Rowe – 5
Tried to get Arsenal back in the game, Manchester City scored another goal instead.

Folarin Balogun – 5
Could do nothing to change the result.

Mikel Arteta -2
He picks the players, this is on him.