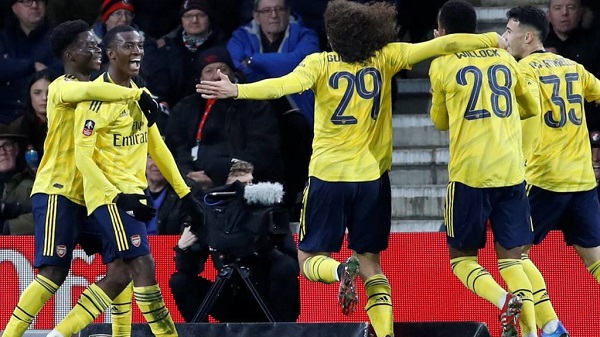 Arsenal player ratings – A good performance from the whole team

It was an overall good performance from the lads last night and the Arsenal player ratings will reflect that.

The first half was definitely better than the second half but I suspect that was because Mikel Arteta told the players not to take too many risks and to slow the game down. Well, hopefully, that was why the performance dropped after half time.

Martinez – 6
Some decent saves but did not look too assured at times.

Bellerin – 7
Did ok without setting the world alight. His fitness will have benefited from the game.

Sokratis – 7
Was fairly solid but still looked ponderous on occasions.

Mustafi – 8
Was having a great game until his injury. His confidence is clearly growing.

Guendouzi – 8
I thought he had a very good game and ran Saka close for man of the match. He also really wound the home fans up which was a joy to see.

Xhaka – 6
Not at his best and too many passes went haywire.

Willock – 8
Had a very good game, looked very comfortable and was instrumental in both goals.

Pepe – 6
Another disappointing performance which is becoming the norm.

Martinelli – 6
A bit quiet and it cannot be expected that he plays brilliantly every game.

Nketiah – 7
Scored but then sort of drifted a little.

Ceballos – 6
Never made an impact but in all fairness, the game was about defence when he came on.

Maitland-Niles – 5
Average score because not on long enough.