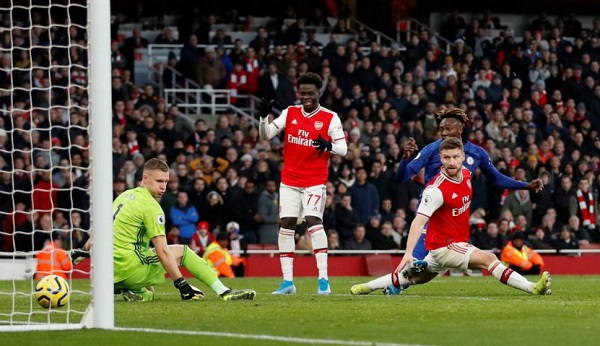 Arsenal player ratings – it was a loss but the performance was better.

Arsenal was unlucky to be on the end of this defeat today at the Emirates. Chelsea got very lucky with an inept referee performance, I mean, how was Jorginho even on the field to score the winner and of course, Leno had a nightmare moment.

That said, the signs are clearly there that things are improving, patience is definitely required.

Leno – 3
Unfortunately for Leno, I cannot judge him on his whole season, just this game and he had a bad one.

Maitland-Niles – 7
Not to blame for any of the goals and was strong and stable. One of his better games.

Chambers – 6
Created an assist for Aubameyang’s goal but was taken off through injury and we never really got to see him when he mattered.

Luiz – 6
Had a decent game considering, however, his inability to come out with the ball effectively keeps the pressure on.

Saka – 5
He tries but he really is not a left-back and it is starting to show.

Torreira – 8
I thought he was immense for most of the game, he dominated the first half and stood his ground in the second half.

Guendouzi – 5
He is starting to lack any self-control. It was once entertaining to see him running around like a headless chicken. Not no more.

Ozil – 7
Excellent in the first half, tired significantly in the second. If Arteta is to build a team around the German he needs to get him to play an entire 90 minutes as he did in the first half.

Nelson – 7
The young lad had a good game overall, his pace did cause Chelsea problems and there is definitely more to come.

Aubameyang – 7
Obviously scored the Arsenal goal, that is what he does and he worked his socks off but there is just something missing when he is always out of the left.

Lacazette – 5
Another substandard game. He tries for sure but he is simply not in form and should not be starting.

Mustafi – 6
He did ok replacing Chambers, made no massive errors but he was lacking a little for the second goal but that is being slightly petty.

Willock – 5
Average when he came on

Pepe – 5
Average rating because he was not on long enough

Arteta – 5
Its a loss, sure there are excuses and the performance in the first half was excellent but the bottom line is we lost at home and really, we should not have.