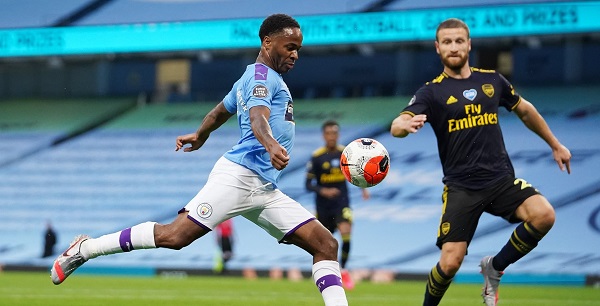 We waited 100 days for the return of football, we all had hopes and in a calamitous 26 minutes, David Luiz single handily destroyed any chance Arsenal had of getting anything from this game.

I cannot complain too much about the initial team selection and injuries early on undid Arteta’s plans and while it has to be said that City was dominating possession, which was always expected, Arsenal were still in the game until Luiz did his horrendous cameo.

Bernd Leno 7
Our best performer but with the defence he has in front of him he was always going to be beaten. 7 is probably a little unfair but that is what you get when you lose 3-0.

Kieran Tierney 6
He did ok, showed some pace but never saw enough from him really and counter-attacks never materialised that he played any part in.

Shkodran Mustafi 5
Was out of position for the second goal and was wobbly throughout.

Pablo Mari 5
Came off early so gets the standard rating

Hector Bellerin 6
A bit like Tierney on the other flank really but was always looking mediocre when Sterling came at him.

Joe Willock 5
Soon realised he was not playing against Charlton in a friendly, questions have to be asked if he is ready for this level.

Pierre-Emerick Aubameyang 4
Anonymous, nothing else to say

Eddie Nketiah 6
Probably the best forward today, at least he showed some energy.

Bukayo Saka 5
Average game and rarely showed the quality he has.

Dani Ceballos 5
Average game, did not offer anything really despite playing for 83 mins.

David Luiz 0
The very first time I have given a zero but what do you expect when in just 26 minutes you give away two goals and get red-carded. Absolutely disaster.

Reiss Nelson 4
Did next to nothing

Ainsley Maitland-Niles 5
Average and not his fault game was done when he came on.

Mikel Arteta 4
Risky team selection and it was not his fault that injuries and David Luiz crushed his strategy but he is responsible for bringing Luiz on and leaving Martinelli and Pepe on the bench when it was obvious they were needed very early on.