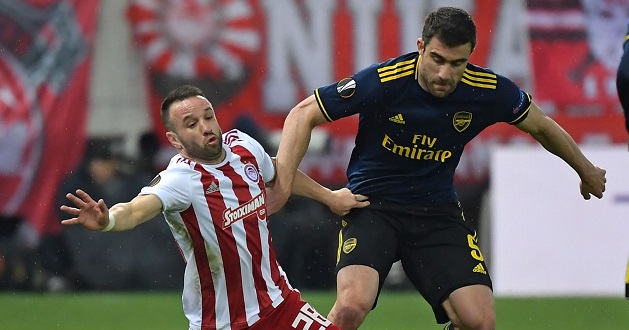 Arsenal player ratings – the defence the standout performers this evening.

Going away to Olympiacos is never easy and that was proven once again this evening. The crowd always make it hostile and the Greek side is not a bad one, they are after all unbeaten domestically this season.

It was not the best Arsenal performance but in context, it was not a bad result at all and the players can feel satisfied with a job well done.

Leno – 8
Made a couple of crucial saves and without him, the result may well have been different. Mikel Arteta fully vindicated in going with the German over Martinez.

Saka – 8
Made the goal with a beautiful pass to Lacazette and he continues to grow in stature.

Sokratis – 7
Considering this was his first game in a while he did ok, worked hard and was solid for the most part.

Mustafi – 8
Made one bad pass but apart from that had a very good game and his wicked ball to Aubameyang started off the move that led to Lacazette’s goal. He is really becoming consistent.

Luiz – 8
Did well at the back and like Mustafi is starting to show some consistency.

Guendouzi – 6
Felt a bit sorry for him, he was clearly targeted and did well not to react but he offered very little going forward.

Xhaka – 5
Not a great game but he was not that poor either, basically an average game.

Aubameyang – 5
He was part of the move for the goal but struggle to see anything else that he did that was notable.

Martinelli – 5
Worked hard but in the same boat as Aubameyang. An average game really.

Lacazette – 5
Let’s be honest, up to the goal he was rank poor and missed some very good opportunities. He has to be credited for being in the right place at the right time for the goal and that salvaged his rating.

Maitland-Niles – 5
Not sure why he did not start, to be honest, he gets the standard rating as was not on long enough to rate properly.

Arteta – 8
I thought his team selection was suspect but at the end of the night, he guided the team to a win, Can’t ask for more than that.