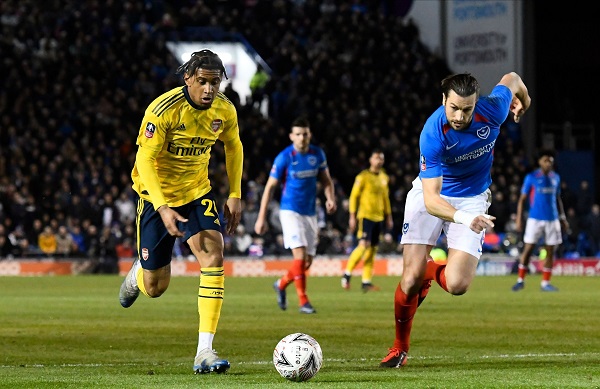 It was not an earth-shattering performance and it was not a bad one either. Arsenal did enough to defeat League One side Portsmouth without too much worry and the quest for silverware this season goes on.

It was a very much changed side from the one that lost to Olympiacos and the players never let themselves or the club down in what was a banana skin of a game.

Martinez – 7
Looked nervy early doors but settled and did not really have too much to do.

Mari – 7
Decent debut and hard to really judge considering the opponents but did look good overall.

Luiz – 7
Solid game, never really tested and even headed the ball a couple of times

Saka – 7
Always looked lively and another one that had a solid game.

Guendouzi – 7
Picked up a silly booking but other than that played well.

Willock – 5
Was not really impressed with him to be honest, he had an opportunity to shine here and never took it.

Nelson – 8
My man of the match, made both goals and if he can transfer this sort of performance to the Premier League and be consistent with it then he is a star in the making.

Martinelli – 8
Had a very good game, was a constant thorn in the Portsmouth side all game, massive amount of energy.

Nketiah – 8
Scored a goal and did what was asked of him, which he is doing on a regular basis now. Must surely be prefered to Lacazette now.

Ceballos – 7
Thought he did quite well when he came on for Torreira. He has to do it against the big teams more often though.

Arteta – 8
Made the big call with wholesale changes and it worked.