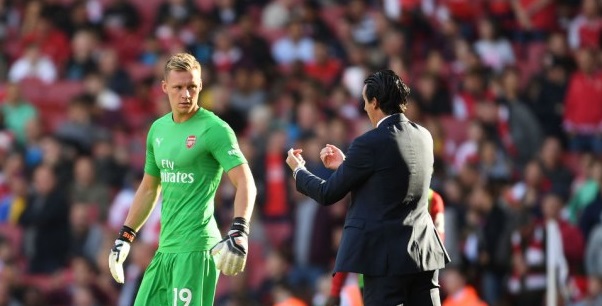 Arsenal was left confused both on and off the field under Unai Emery, Bernd Leno has admitted.

The German goalie was signed by Emery and he has been Arsenal’s undisputed starter since he joined the Gunners. However, he admits that the team were a shambles under their former manager.

Emery was brought in to replace Arsene Wenger in 2018 and the Spaniard had a good first season. He led the club to the Europa League finals as well as a top-six finish, however, this season began poorly and they never fully recovered.

Leno has claimed that the team was confused under the former PSG boss and they had the wrong mentality as well.

Speaking about Emery’s reign, Leno said per the Sun: “The mentality out on the pitch, I don’t want to say it was a mess, but it was a bit confusing.

“Everyone was doing different things.

“We were not a team.

“Not in the dressing room, not on the pitch and you could see that.”

The Gunners seem to have gotten better under Mikel Arteta even though they have struggled to win games.

Leno also admits that there have been obvious changes under Arteta and the club feels more like a team now than it was before now.

“I think with Mikel it changed completely, you can see.” Leno said.

“From the first day he came he was not talking too much about tactics.

“He was talking about how we behave in the dressing room, when we go the games we have to be more professional like a team.”

Well, Leno had better hope that the team starts to move up the table because if they do not then the finger will no longer be pointing at the former manager. It will be pointed right at the players.