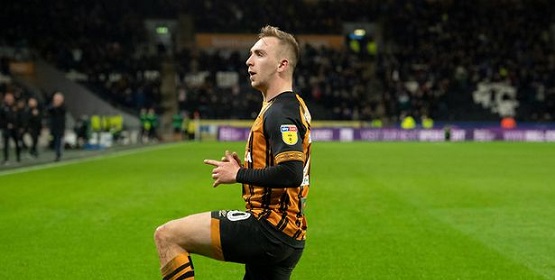 Arsenal will be needing a replacement for Danny Welbeck and possibly even Pierre-Emeric Aubameyang and it would be nice if they target a proven hitman with a prolific scoring record wouldn’t it?

Nah, that was never going to happen, instead, they are reported to be preparing a £12 Million bid for Hull City hitman Jarrod Bowen.

You may ask who? Don’t worry, you are not alone.

Apparently, Arsenal have been watching him since January and in all fairness, he did the back of net 22 times last season and he is still young.

But even so, he is a Championship player and you have to wonder what the likes of Eddie Nketiah are thinking right now.

In fact, we do as Nketiah has been speaking about what he can do for Arsenal

“I’m going to go back to Arsenal and see where I stand,” he told Sky Sports News.

“I’ve prepared well to go back into pre-season but I need to see what plans the manager has for me and we’ll take it from there. At the moment I am returning back to Arsenal and will give it my all.

“[Lacazette and Aubameyang] are good players but there are a lot of good players in every position at Arsenal.

Well, you can only imagine what thoughts will be flowing through his mind when he reads that Arsenal has been monitoring Bowen since the start of the year and are now preparing a bid for him.

And even if this particular piece of gossip is false it is telling that Nketiah has no idea what the clubs plans are for him. Arsenal man-management skills are simply awesome are they not?

The fact that no other major club is going in for Bowen and that he is a relative unknown is rather telling and I have to be brutally honest and say I am not at all excited by this one.

We have talented youngsters and yet we are targeting a move for a Hull City player from the Championship.

Something has definitely gone wrong somewhere if we cannot give our youngsters opportunities and instead prefer a Championship player.