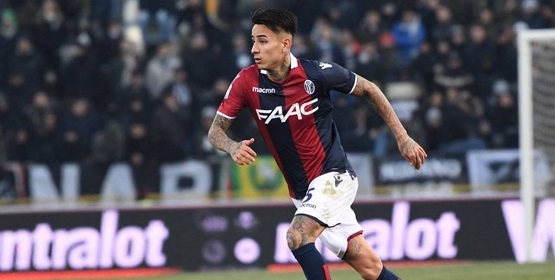 Arsenal manager Unai Emery is determined to strengthen his squad before the start of the new season but due to a limited budget is having to look for quality players at bargain prices and he may just have identified one in Bologna midfielder Erick Pulgar, according to reports coming out of Italy.

The Chilean international has a release clause in his contract at just €12 Million, a fee that even Arsenal can easily afford.

Pulgar is currently on duty at the Copa America where he has helped Chile progress to the semi-finals with some impressive performances. His displays in Brazil follow an excellent season in Serie A which has brought him to the attention of a number of clubs including AC Milan, Inter Milan, Napoli, Roma and Sevilla.

Bologna are hoping that the 25-year-old will extend his contract but that is looking increasingly unlikely with so many high profile clubs interested in his signature.

The midfielder is the exact sort of player that Emery has been seeking, a talented player available at a fraction of his true worth who is currently in fine form and that will fit into a position that the Arsenal manager is desperate to fill ever since Aaron Ramsey left for Juventus.

The competition will be fierce in the battle to sign Pulgar and it may well come down to personal terms if more than one club activates the low release clause.

NEXT - Arsenal offered France international forward at a discount

This one is well worth keeping an eye on because Pulgar really does tick a lot of the boxes.