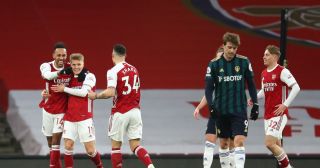 Pierre-Emerick Aubameyang has completed his first hat-trick as Arsenal run riot to beat Leeds 4-2 at the Emirates.

The build-up to this game was all talk of a fierce battle, with a high intensity game to ensue, but the first-half didn’t follow suit.

The Gunners took the early lead thanks to Pierre-Emerick Aubameyang. Emile Smith Rowe and Granit Xhaka combined to find the Gabon international in his trademark wide-left, and he carries it into the box, cuts to the side and places his effort out inside the near post.

Before we could finish celebrating, Bukayo Saka was brought down inside the box. We were in shock when the referee was called over to check the VAR monitor however, and even more surprised when the decision was overturned.

It didn’t take long for us to get ourselves over the decision however, as soon after we had a penalty given. The young Leeds goalkeeper had the ball in his box, chose not to take the pass or clearance on, and instead tries to turn Bukayo Saka, and our speedy winger forges himself between Meslier and the ball and is brought down.

Aubameyang made no mistake in sending the French shot-stopper the wrong way to double our lead in the opening half, and shortly after it was three also.

This time it was Hector Bellerin’s fine run which saw him break into the box, and he fires hard and low to the keeper’s inside post to seal a 3-0 lead going into the break.

Marcelo Bielsa opted to make two changes for the restart, but only minutes into the half there was another mistake, and another Arsenal goal.

The Leeds player once again opts against taking the easy pass, and is pickpocketed deep inside his own half by Emile Smith Rowe, who glides just inside the box to cross into PEA who nods home.

At this point we are thinking about how many we are going to win by, but the team appeared to take their foot off the pedal, and Willian was brought on to replace ESR, and all of a sudden our opponents came alive.

Pascal Gruijk rose high from the corner to power home past Bernd Leno, who had enjoyed a fairly quiet match prior to picking the ball out of the net.

10 minutes later Raphinha’s run has been spotted by his team-mate to get in behind Hector Bellerin and he darts into the box to find Helder Costa to fire home.

All of a sudden, we now only have a two-goal lead with 20 minutes left to play, and the team is forced to wake up.

Thankfully, it was Arsenal who enjoyed the best chances in the remainder of the match. Aubameyang came close to adding a fourth, and we were able to enjoy the dying minutes of the match, that was until we saw Aubameyang limping again…

The forward will hopefully be fighting fit for Europa League clash come Thursday, especially as he finally looks to be back to something close to his best.

Will Arsenal ever learn not to switch off? Should they not have carried on to win convincingly?