Arsenal has been linked with a move for AS Roma winger Justin Kluivert for some time now and a new report claims that the Gunners have intensified their efforts to land him.

Kluivert has been inconsistent since he left Ajax to join AS Roma in the summer of 2018 and he might continue his career at Arsenal.

Still just 21, the Dutchman has been suggested as a possible addition to a swap deal with the Italians that could see the Gunners part with some cash and Henrikh Mkhitaryan in the summer.

A new report from CalcioMercato is claiming that Arsenal had made the first contact with the player some time ago and that the club has intensified their efforts to get him to London in the last few days.

It adds that AS Roma needs the cash from selling the winger as they will look to avoid the painful sale of the likes of Nicolò Zaniolo and Lorenzo Pellegrini.

The Gunners, the report says, has offered him a four-year deal worth 3.5 million Euros per year which is more than double what he earns in the Italian capital at the moment.

Arsenal splashed the cash to land Nicolas Pepe last summer and they have Bukayo Saka who can play on the left-wing when all the club’s left-backs are injury-free. It remains unclear how often Kluivert would feature if he joins. 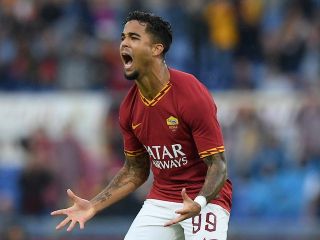