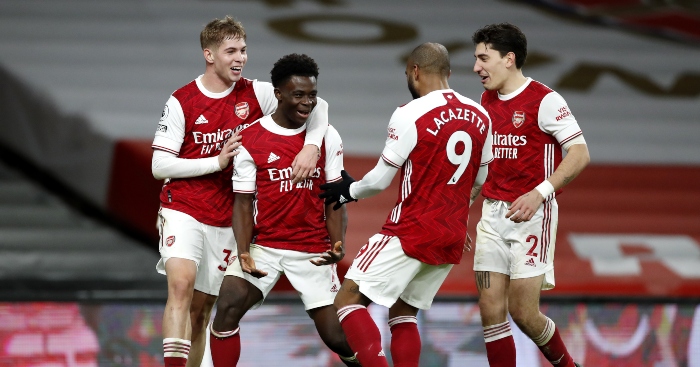 The Gunners are definitely back to their best, and wasted no time in taking a firm grip on the game.

Arsenal made their intentions clear early on as they dominated possession, was positive on the ball, and they didn’t have to wait long to break the deadlock.

The goal came from an unlikely source, but what an amazing strike it was. Kieran Tierney was the man to to break free down the left flank, playing the ball round the first challenger, before cutting in to his right, just inside the box to fire home.

It wasn’t long before some neat team play saw Emile Smith Rowe through in on goal, and he did the unselfish thing by teeing up Bukayo Saka to tap home.

They managed to survive at 2-0 going into the break, with just one half-chance from a corner to take note of in the opening exchanges.

The second-half was much of the same, albeit with Hector Bellerin having to come off for Ainsley Maitland-Niles early on.

Alexandre Lacazette scored our third, with a bit of pinball inside the box which could have gone in the net three times. The initial strike would have been an own goal, but that struck the post, before falling to Emile Smith Rowe to force the save, but the Frenchman made no mistake given the chance.

Less than five minutes later he scored again, taking his tally to five goals in his last four matches, having scored in each of the last three before this one. This effort was made by Pierre-Emerick Aubameyang down the left, who crosses into the middle for Laca to tap home on the stretch.

I thought we was going to make it five and match Leeds score from a few days back when Auba found himself through running down on the goalkeeper, but his luck hasn’t quite turned around just yet.

Sam Allardyce now has a goal difference of -12 from his opening four matches, with a 1-1 draw with Liverpool to take credit for surrounded by losses, and his record of never having been relegated is definitely at stake here.

More importantly, Arsenal definitely look back in the running for a place in Europe, with just three points separating us from sixth.