Arsenal’s Invincibles were great, but don’t forget the 2001/02 side.

With Watford beating Liverpool yesterday, there’s unsurprisingly been much attention on Arsenal’s Invincibles remaining unmatched for another year.

Liverpool lost their first league game of 2019/20 yesterday, and saw their overall unbeaten run end at 44 games – the second highest ever behind the remarkable 49-game run by our 2004 side.

However, as has been pointed out by Michael Cox and others, it’s slightly surprising that another of our incredible and unique achievements has been so easily forgotten… 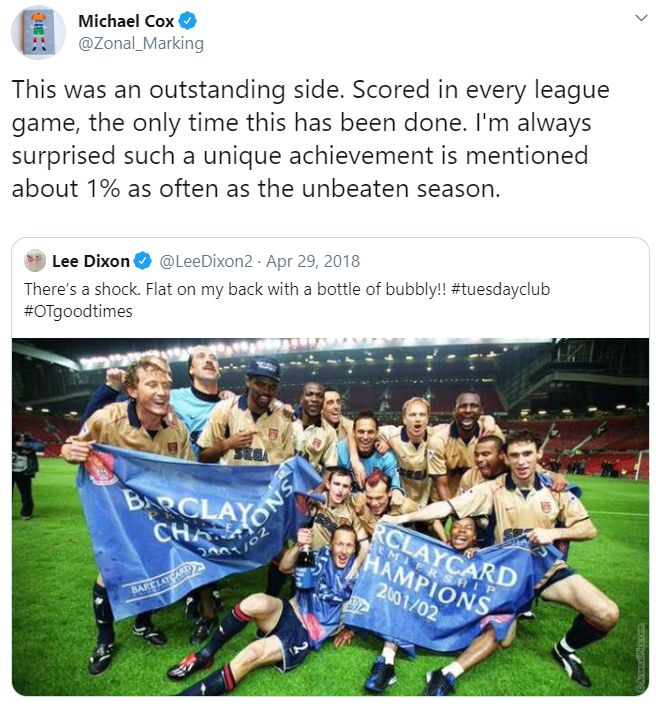 Liverpool’s failure to get on the score sheet yesterday means they also won’t be matching the 2001/02 side’s amazing run of scoring in every game. In total, that Arsenal team scored for 55 consecutive matches – another record we still hold and may well hold forever.

Arsenal were also unbeaten away from home that season, and won 13 league games in a row to take the title at Old Trafford of all places. Our football was scintillating, and arguably better overall than for much of the Invincibles season, and of course it yielded more trophies as we also won the FA Cup.

The Invincibles more than deserve their place in the history books, but we mustn’t forget this other legendary Arsenal team either.