Arsenal should start with Podolski beside Alexis

This season, we’ve witnessed a lot of experimentation with the Arsenal lineup, ranging from the trusted 4-2-3-1 to the much-hated 4-1-4-1. One of the main reason for this is the fact that we have too many similar central midfielders, and as Wenger admitted, when everyone is fit, it’s hard deciding which midfielder to leave on the bench.

However, ever since the heart-attack 2-1 win over Anderlecht, Wenger seems to have been rethinking the Arsenal formation and has switched to a 4-4-2 in the last two games. This tweak came with instant rewards, with Arsenal plumbing in 5 goals over the course of two games and with none conceded. One could argue that the games were against weaker opposition, but when you consider that Arsenal has laboured against teams like Leicester and Hull earlier in the season, then it is fair to say that the team has made progress in the last two games.

In the thick of Arsenal’s recent resurgence, is Alexis Sanchez, who seems to thrive in the extra freedom of playing centrally. Although, Sanchez himself prefers playing on the left wing, it seems he’s more productive centrally, and the manager also thinks the same. Wenger said: “Since he has played through the middle he looks more dangerous because he is in full confidence, is physically strong, he likes to take people on as well and he makes perfect runs.”

In the second half of the game against Burnley, Arsenal fans had a glimpse of the attack that Wenger might finally commit himself to for the rest of the season. Walcott, although short of fitness, came closer to scoring than the OX has managed throughout the 80 minutes that he was on the pitch. On the other side, Podolski was busy launching canons against the sorry Burnley woodwork. And when Podolski’s low cross found Sanchez, after good work from Cazorla, it seemed Wenger had finally struck gold on the formation to go with for the rest of this season.

An attacking pair of Sanchez and Podolski would easily match the strike-force that any of the other top EPL sides have to offer. Although Welbeck has done quite well since his coming, he has looked fatigued in recent games and is certainly deserving of a well-earned rest. And in any case, there’s hardly a player in the squad that can match Podolski’s skills in front of goal. Maybe there’s life yet in Podolski’s Arsenal career!

Against Anderlecht, the Arsenal team virtually picks itself, if form is to be the selection criteria. With his winning goal against Anderlecht, and exploits against Burnley, Podolski has done more than enough to merit a start for the first time this season. With Wilshere injured and Ramsey slowly eased back into the team, it seems we’ll once more witness the double pivot of Arteta and Flamini, which hasn’t done much wrong this season. Cazorla would maintain his place in the left of midfield, often dropping in centrally when we have the ball, while the OX should take his spot on the right wing, after an excellent showing against Burnley over the weekend. 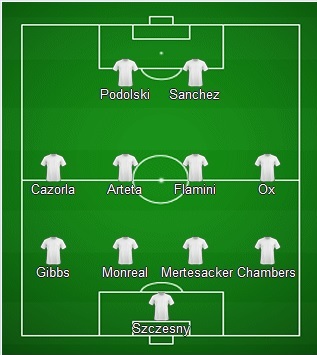