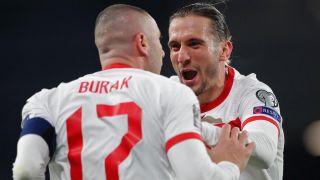 Arsenal should take Burak Yilmaz to boost our goals tally

I have found our next striker!

After Aubameyang’s scoring feat last season there is no doubt his lack of goals has really affected things in the team, but we know that we are not a one man team and we cannot rely on him to get us the goals and the wins in every single game.

So here is where we can get a new addition to the team as we are crying out for a striker, well Turkey national Burak Yilmaz helped inspire his team to a 4-2 win against the Netherlands last night by scoring a hat trick to become Turkeys second highest goal scorer second behind Hakan Sukur.

Having been one of nine players to have played for Turkeys top three sides Galatasaray, Fenerbahçe and Besiktas where he scored 178 goals at his time across those teams. He went on to play for Trabzonspor in Turkey too before going off to China where he lasted one year at Beijing Guoan appearing 28 times and scoring 19 goals.

He then returned to Turkey, back to Trabzonspor where he played in 2010-2012 playing 32 times and scoring 28 times, he left Trabzonspor in 2018 and went back to Besiktas after 10 years away, playing 40 games scoring 24 goals.

And last year he decided to join French club Lille where so far, he has played 20 games and scored 9 times. He became Turkish super league champion twice with Galatasaray in 2012-13 and 2014-15 and picked up top scorer twice in the super league, once in 2011-12 with 33 goals at Trabzonspor and in 2012-13 with Galatasaray.

Now his stats in his senior career from 2002 until present boasts 442 appearances and 233 goals and his international stats boast 188 appearances and 31 goals since 2001 and despite being 35 years old he has showed that scoring a hat trick against what is ranked as one of the best teams who could challenge for the World Cup right now, surely says a lot about the type of player he is.

He can adapt to any team and will always give a threat in front of goal. His 6ft 2 frame gives height advantages and he has showed many times he can score in many ways.

So if we are looking for a striker to give us a chance of some goals then I would say Yilmaz is a shout and let’s put it this way, he can’t be any worse than some of our previous strikers we have had at the club right Gooners?